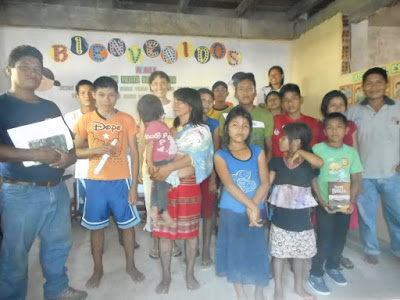 We had a very full and exciting 3-day training this time in that we had a double wedding and 8 baptisms included in the training sessions!  Since the inauguration of the new church in San Francisco there needed to be concentrated training on what the church is and how each member is to participate.  Along with these trainings two couples of the congregation wanted to solidify their union in the eyes of the Lord and in the eyes of the State by getting married.  In the Shawi culture couples do not have marriage ceremonies as we do and so when they become Christian they have a desire to be formally married in this way and so, of course we honored their request. 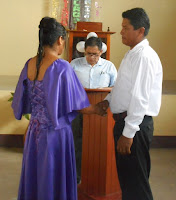 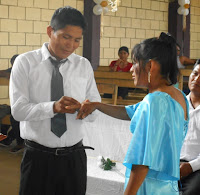 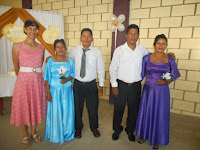 This was very exciting because both couples have a strong desire to follow the Lord with all their heart.  The couple on the top left are Sabina (purple dress) and Jitler.  Jilter just rededicated his life to Christ and was strongly with the Lord years ago in the beginning when I was evangelizing the villages of Shishinahua but later fell away.  The second couple, top right, are Nilton and Paula (in the blue dress) and Nilton and his father accepted Christ about two years ago and have shown tremendous change in their lives.  Since then Paula and their children also accepted Christ and have all been water baptized.  Nilton wants to be the leader/pastor of the San Francisco church and so will start training as soon as possible to assume this role.  Please keep him in prayer because he is a bit intimidated by the responsibility.  He is already a village leader and so to take on another role can be challenging.
Along with these mile-stone events we also had eight people that wanted to be water baptized, four of which were Sabina, Jilter and their two older children.  Along with them were the two children of Nilton and Paula, Nilton’s brother and a young man from a neighboring community that Nilton invited.
It was a tremendous time and a great deal was accomplished.  We closed our sessions together with a teaching on the Lord’s Supper, taking communion for the first time as a “church” and then praying over each one for the Lord’s blessings to be richly manifested in their lives.
I want to thank all of you that are standing with us in prayer for this work and all that the Lord wants to do with each person that has come into the Kingdom.  I know He has great plans for San Francisco and for all the other villages that will be reached by them.  May the Lord richly bless you for your faithfulness in all you do for Him.
Forever Held Firm in Him,
Sharon Malcolm