Our last trip to San Francisco in April was to bring the Assembly of God pastors who will be overseeing their new church to meet the rest of the village and minister in the Word of God.  It was a very special and blessed time because the residents and the pastors got to know each other better and bond more deeply.  We will be traveling again to San Francisco this Saturday, June 10, with an Assembly of God team from the States to build the first church in their village.  While the men on the team are doing the construction the rest of the team, Maria and I will be traveling to the other villages of Santa Clara, Santa Rosa and Yarina to minister in children’s and adult Bible studies.  By the end of the trip we will have had baptisms, a wedding, a church dedication and a commissioning of the village leader named Nilton, who has chosen to be the church leader and pastor of his community.  He will be going through a Bible institute which, upon completion, the Assembly of God will ordain him as the pastor of San Francisco.  In the meantime he will be the acting authority in the church leading Bible studies and Bible storying for the congregation.  Would you join with us in praying for this trip from Saturday, June 10 to Thursday, June 15?  We will traveling with a total of 26 people including the boat drivers in three boats full of equipment and people and so safety as we travel is a must.  Also that the Holy Spirit will touch hearts and souls for the Kingdom as we minister.
______________________________________________________________________________________
Bio-Sand Water Filters in San Marco
I had the privilege of having a team from a supporting church in Nazareth, Pennsylvania join me at the end of May to make 12 bio-sand water filters in the village of San Marco.  This is a village made up of Maria’s extended family and it was such a joy to meet and work with them in completing this project.  We did have a few challenges though.  Fortunately it rained quite a bit so the water in the river was high enough to travel to the village without having to push the boat over a sandy bottom.  Unfortunately though, because it was so high it completely covered the much needed sandy beaches we needed to make our water filters.  The only option was to dive into the water with a bucket and scoop out the sand from the bottom of the river in order to have enough to properly wash and use to install the filters.  The team, along with the villagers bravely did this until there was enough sand to complete 12 of the 16 filters we set out to do.  Four of the families choose to wait until the water receded before collecting their sand and they will wash and install at a later date. 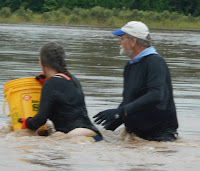 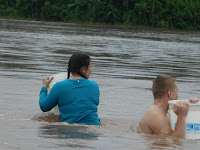 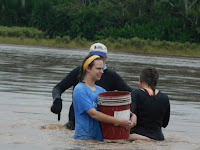 The team also ministered to the community in beautiful hymns song acappella, skits based on Bible stories, testimonies and preaching the Word of God.  They also had the opportunity to minister in my home church in Yurimaguas when we got back in the same way.  I was so very blessed to have this team and be ministered by them and minister along side of them.

A very rich blessings on all of you in the name of our Lord Jesus Christ.