According to Humanity Road, a disaster preparedness and response information organization, “Intense rains have caused severe flooding and landslides in 24 of Peru’s 25 regions and 12 regions have been declared in a state of emergency.  It is the worst flooding in two decades, and more storms are expected.  According to the National Emergency Operations Center, 99,475 Peruvians had lost everything since the beginning of the year, while 626,928 had suffered less serious damage to their homes.

According to a news article, “Across Peru more than 90 people have died since the start of the year as unusually heavy rainfall caused landslides and flash floods.”

All of the affected areas are along the coast line of Peru and are bracing for more rain this weekend.  Since I am quite a bit inland in Northern Peru our area is not affected.  I have been trying to contact different organizations for volunteer opportunities to help with clean up, food preparation and distribution or anything else I can do but so far have not made contact.  We have two missionary families from the Assemble of God that have come to Yurimaguas about 1 1/2 years ago and one of them is going this Sunday to work with a church in one of affected areas.  They will let me know how things are and what can be done to help so that I can possibly join them later.  Please pray for the quick restoration of the affected areas and that no more lives will be lost.

5-Day Training
I want to thank all of you who stood in prayer for our 5-day training.  It went very well and I am so excited to say that not only the men participated in leading a Bible story but also the women.  They all stepped way out of their comfort zone and took the challenge of getting in front of their peers to lead a Bible story and a discussion to draw out the meaning of the story in order to apply it to their daily lives.  The goal was to get the people accustomed to doing this as much as possible so that when they returned to their villages they could continue doing this with those who did attend the training. 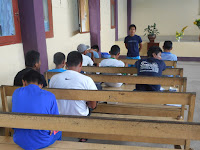 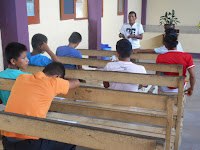 Men sharing Bible stories and leading the discussions
A New Church Plant
On a village visit just prior to the 5-day training we met with the residents of San Francisco, one of the villages we’ve included about 1 1/2 years ago, to discuss the option of them becoming an established body of believers with the Assembly of God.  San Francisco has been very responsive to the Gospel and several people have already accepted Christ, been baptized and now, as a community, want to become a church.
The authorities of the Assembly of God church in Yurimaguas and I coordinated a time to meet with San Francisco and the rest of the people attending our 5-training to discuss what needed to be done in order for them to come under the covering of the AG church.  It was a very profitable meeting and once the paperwork is filled out by the community, reviewed by the AG authorities San Francisco will be a church!
In a prior meeting, the authorities told me that they had been praying about reaching out to the villages of the Shishinahua through a contact they had and so my coming to them with this request was quite timely.  I had met and worked briefly with two of the three authorities in the past and was quite impressed with their commitment to the vision of reaching the unreached with the Gospel and raising up leaders from within these areas to carry on the work.  I am looking forward to working with the Assemble of God to expand the Kingdom in this area and feel very confident that the Lord will richly bless our efforts together.
I want to thank all of you who stand in the gap for this work in so many ways and pray that you will take part in rejoicing in this monumental move of the Holy Spirit.  This community has never had a church in their village before and so by taking this step they are declaring that this is now God’s territory!  God bless all of you for all that you have done to help bring this about.
Rejoicing With You,
Sharon Malcolm